The rain threatened, but never succeeded on canceling the festive Portmouth Folly Regatta hosted by the Balboa Yacht Club on Saturday, December 18th.

The Regatta consisted of two classes: Keelboat Fleet (which included the Harbor 20’s) and the Centerboard Fleet.  A total of 9 Harbor 20’s participated along with a Thistle and a Santana 20.

The race committee selected an exciting (roughly) windward / leeward course taking the fleet outside the harbor to the J mark and back to finish. With winds at about 10-12 knots, blustering and threatening weather, and swells that occasionally broke over the and into the boats, the Harbor 20’s proudly and confidently tacked up the channel, out of the harbor, around J Mark, and back down the channel to the finish. Each race lasted about 40 minutes. 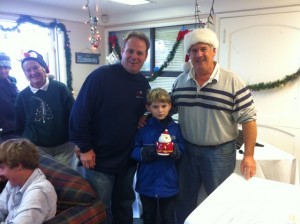 Nik Froehlich (#109) sailing with Mindy and her parents and uncle, was awarded the “Most Festive in Keelboat” award. 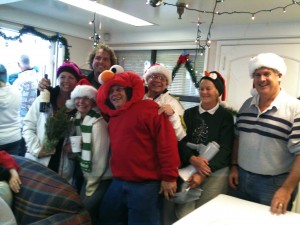 Before the awards ceremonies, the kids lead all the sailors with a unique rendition of the 12 Days of Christmas.