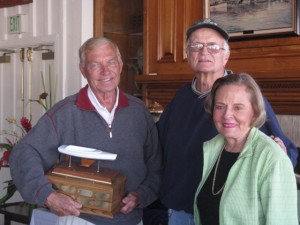 On Sunday, February 7th, the new Ted Munroe Perpetual Trophy was awarded to the A and B Fleet winners of the 2011 NHYC Winter Series.

In attendance for the inaugural presentation of perpetual Trophy was Dottie Munroe, wife of the late Ted Munroe. Presenting the awards was NHYC Staff Commodore Phil Ramser.

The winner of the A Fleet was Jim Kerrigan, who squeezed out second and third place winners Tom Schock and Karl Pomeroy.

The winner of the B Fleet was Gale Pinckney who, ironically, is the new owner of Ted’s Harbor 20. Hellen Duncan and Win Fuller took second and third place in the series. 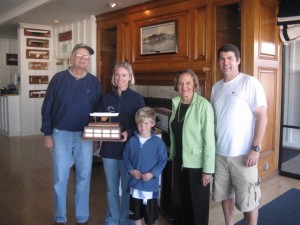 The new trophy was designed and created by Peter Haynes and will be owned by the Harbor 20 Class Association and will be awarded each year to the winners of the NHYC Winter Series for both A and B classes.