What I learned from the Winter Series #4

The NHYC Winter Series #4 was held on Sunday, February 6th – the last of a 4-day series of races.  My last “event” was the Strategy & Tatics Seminar by Peter Haynes the previous Sunday, and I was fresh with ideas, enthusiasm and eager to “try out” all the new info I learned at that Seminar. I’d like to share my perceptions of part of the first race since I learned so much in that 20 minutes of sailing with the A fleet!

They wind that day was a bit crazy. Generally, it was out of the West-Southwest, but very shifty with wide shifts from West all the way to South. It seemed to be picking up and I hit the course about 30 minutes early with the goal of getting a feel for the wind and coming up with my strategy.

After sailing the area for a bit, it seemed to me that the right side was favored. 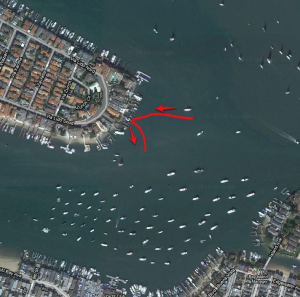 It just seemed to have more wind and I was thinking that the wind would be shifting to the right during the day anyway (persistent shift). I did another run up the right and noticed that as I approached the end of Lido there was a consistent lift and increased the closer I got to the island. The wind seemed to be coming around the island’s lee and lifting me up. I could sail all the way to the docks without losing any wind at all and the lift was substantial. I also noticed that when tacking back to starboard, after just a few boat lengths I would emerge from the header into another lift as I came around from under the lee of the island. A double lift! I tested this a couple times, and it seemed to be pretty consistant, so I decided this was my plan….get to the right and then use this double lift phenomenon AND benefit from what I thought could be a persistent shift to the right.

The pin was clearly favored moments before the start. Most the fleet was positioning themselves for a start near the pin while I was positioning myself for a committee boat start. I figured I’d give up the favored end of the starting line so that I could tack immediately after the start and head off to the right, and to the lee of Lido. 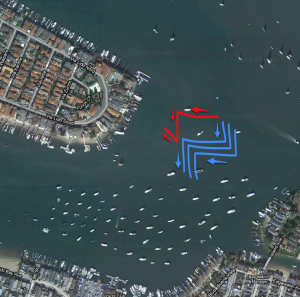 Red is Me, Blue is the Fleet

The starting strategy paid off!  I started near the committee boat, moving fast, with the fleet on my port. I tacked to port immediately into a lift heading to the right as the fleet was still going to the left in a header. However, after just a few lengths, they tacked back to port. About 1/3 of my way to the right side, the wind starting shifting right again and I saw a perfect opportunity to tack to starboard, take not only getting a lift, but forcing the entire fleet back to starboard and to the left side of the course (protecting my right side strategy!). That worked as well. I was ahead, and everyone had to tack as I headed to the center of the course on Starboard.

After most the fleet was heading left, I tacked back to port and headed back to the right side, toward the lee of Lido. Sure enough as I approached Lido, I got my big lift and took it to within a few feet of the docks, tacked and got the double lift effect as I emerged from the lee of the Island.

By now, most of the fleet was on the far left side of the course, and I was way ahead! I continued with my strategy of staying to the right, thinking the wind was persistantly shifting to the right. Again, luck on my side, I found a huge sustained lift on my last starboard tack and took me straight to the windward mark as most of the fleet was coming in on a big header from the left side.

I rounded the windward mark well ahead of the entire fleet starting my downwind leg.  I’ve never been in this position with Tom Schock, Jim Kerrigan and a host of excellent A Fleet sailor bearing down on me. I’m quiet sure at this point, I stopped thinking about the strategy and tactics I learned at the Seminar. This was the beginning of the end of my lead!

As we approached the end of Lido going downwind, the wind stopped. I was at least 8 boat lengths ahead of the next competitor. I felt like a trapped animal being pursued by vicious predators. Really!  Here is what I did (wrong) and what I think I should have done (in hindsight!):

Right: Light wind: Sail to the pressure!!  Yes, I remember. If there is no wind, find the wind. Carefully, slowly, I looked for ripples that indicated some wind.

Wrong: Peering ahead I found a patch down towards the lee of Lido towards the main channel. The course would take me a little off the rhumb line to the leeward mark, but I saw wind ahead!  A quick glance back, I noticed the fleet was not gaining on me. Ah Ha! I’m going to get to that wind first and take off to the mark.

What I learned #1: Firstly, when going downwind, I should be looking behind me for the wind, not ahead of me. Duh! I learned this and should know this. Perhaps the pressure of the predators coming down on me got me into a flight mode. I don’t know. Needless to say, I never did catch that wind that eventually continued downwind faster than me in no wind, and I ended up not moving (outside of the current!).

What I learned #2: When there is no wind, and a pretty good current, it’s a good idea to stay (or get) in the current that is going your way anyway, especially if your already there.

What I learned #3: On the downwind leg, keep my eyes behind me, and cover! Don’t split from the fleet when I’m ahead, especially with no wind and a current.

What I learned #4: My heart rate goes way up when I’m in front and I see top notch sailors pursuing and ready to pounce. No room for error!

Post Script: I lost two positions in the long downwind leg, to Jim Kerrigan and Tom Schock. I kept my 3rd position all the way up the 2nd beat to windward, again using the right side as before. Coming downwind, I again chased the wind, left the current to the south (would have to climb up that again), did not cover anyone behind me and allowed the entire rest of the fleet pass me so I rounded the leeward mark next to last place.  I consider this my best H20 race to date!