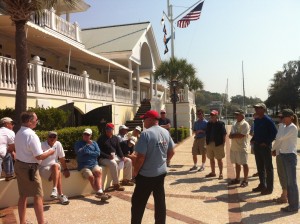 Day 1 of the East / West Coast Challenge ended with a clear lead to the Fleet 3 of South Carolina Yacht Club. After 6 races, the score is 96 for the East Coast and 120 for the West Coast. The 24 point deficit creates a big challenge for the West Coast going into Sunday’s racing.

The day provided the sailors will steady winds from the south at about 15 mph winds with gusts to 20 mph. With a steady current, selecting the right way up the course proved to be decisive in placement for the races. The competition was strong with boats mostly having close finishes. 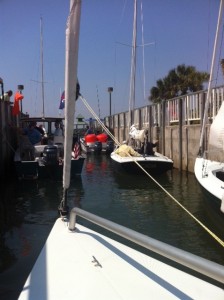 Exiting the Harbor into the Intercoastal via the Locks

After a morning briefing by the race committee,and the journey out the lock system, the teams enjoyed three long races (W-L-W-F) and three short races (W-L).

On Sunday, sailing will being an hour and half earlier at 11:30am to try to beat out an incoming weather system. 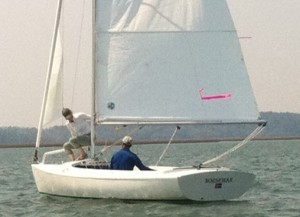 Anne doing some last minute "adjustments" to the Hoyt Boom for the West. Ed Kimball Skippers.