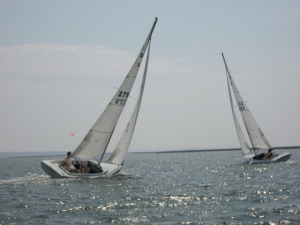 After Day 1, and 6 races, Fleet 3 had a commanding lead of 24 points. The Challenge was scored using a low-point team racing system (although team racing rules were not in effect). Day 1 brought steady winds of about 13 mph with gusts up to 17 mph (as reported by the Racing Committee). 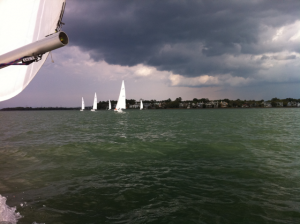 On Day 2, the winds had shifted to the West and the racing started early to try to complete as many races as possible before a storm system was expected to arrive. Winds were again about 13 mph with gusts up to about 17 mph. With a new course and winds from a different direction, most the “local knowledge” learned by Fleet 1 on Saturday had to be relearned on Sunday.

The racing was cut short to 4 races to avoid a quickly approaching storm. The Race Committee timed the last race perfectly, allowing the sailors to get the boats back into the safety of the lock-protected Windmill Harbour just as the wind shifted to the North, picked up velocity and the rain started. 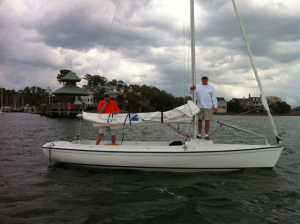 Although Feet 1 did better on Day 2, the Fleet from South Carolina Yacht Club continued winning the races scoring lower points, and in the end, defeated Fleet 1 in all 10 races with a decisive victory overall, regaining the perpetual trophy two years ago.

The awards and dinner were held at Bob De Veer’s home on the beach of the Atlantic Ocean. 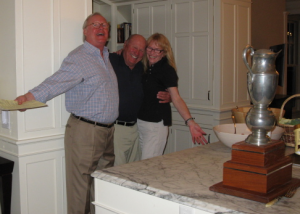 I Have No Local Knowledge: Rolly Pulaski