Newport Beach, CA – The 23rd Annual Women’s Sailing Convention on February 4 was attended by 200 women from all over North America. Twenty-five of these women were lucky enough to have a chance to race Harbor 20s during the afternoon Race Workshop, which was also scored for the BCYC Melanie Patterson Memorial Regatta. 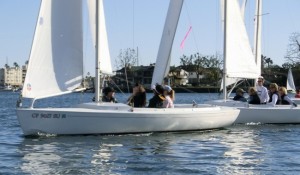 There were five Harbor 20s, each with one coach and three or four students. And the class was one of the first to sell out, with women eager to try racing in the bay on a boat that would give them an exciting opportunity to practice starts and experience the thrill of one-design racing.

The Women’s Sailing Convention is a Southern California Yachting Association event and was held at the Bahia Corinthian Yacht Club in Newport Beach, California. The all-day event is open to all women interested in sailing – from novices to experts – and always takes place, rain or shine. 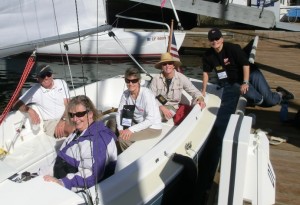 such as how to de-escalate a pirate encounter. The women learn to tie knots, navigate, dock, rescue overboard sailors, prepare delicious meals, race, and more.

During the morning, most of the women who had signed up for the afternoon Harbor 20 Race Workshop attended courses on racing rules and tactics.

These courses were presented by Sandy Mills, a US Sailing Judge and Principal Race Officer at Bahia Corinthian Yacht Club. She did an excellent job of reviewing the basic elements of sailboat racing and made it sound fun and intriguing. I attended one of Sandy’s seminars and thought that most compelling bit of information she shared was a 2001 Scuttlebutt posting by US Sailing Sr. Judge Don Becker. He simplifies the rules down into nine succinct bullet items. 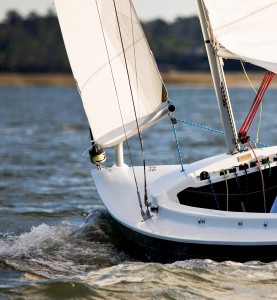 [The racing rules] quite simply:

• The boat astern keeps clear of the boat ahead.

• A boat tacking keeps clear of one that is not.

• If you gain right of way or change course, give the other boat time to keep clear.

• The inside boat(s) at [three] boat lengths from the mark is entitled to room to round the mark.

• A boat that is backing up or not racing keeps clear.

• If you have violated one, take a penalty. 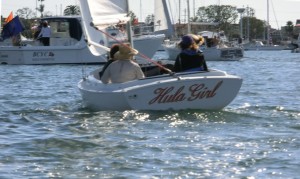 This covers 95% of the situations out there.

With regard to the starting system, I have noticed that when the first signal goes up you do need to be ready to race.

While the students were busy learning rules and tactics, the Race Workshop coaches met with Tom Schock for a dockside chat aboard one of the Harbor 20s.

Although each of the coaches is an expert sailor in her own right, most of them have had few opportunities to race a Harbor 20, so Tom shared seven Harbor 20 go-fast techniques. 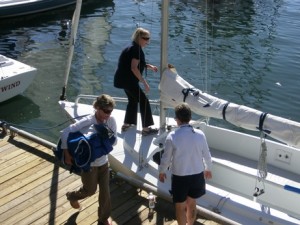 1. In a Harbor 20, it is really important not to let your crew weight get too far forward. The boat has a narrow bow and a buoyant stern section, and the sail control console just aft of the mast seems to draw the crew toward the front of the cockpit.

The driver should sit at the forward end of the tiller, with the crew right next to her. Since we would be sailing with one coach and four

students, Tom suggested that the coaches sit aft of the helmsman. Conditions looked light to medium, so it seemed we could probably also have one person sit to leeward.

2. Nearly all sailboats are fastest when sailed relatively flat. The Harbor 20 is no exception. To keep her sailing fast upwind in heavier wind, it is really important to play the main – easing it in the puffs and bringing it back in during the lulls. With a crew of four, it was decided that one would steer, another would trim the main, and two could trim the jib. 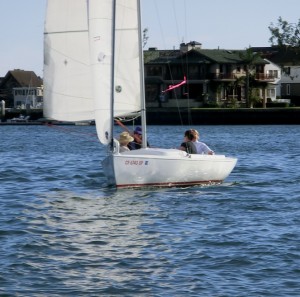 3. There are three basic settings for the jib: “Loose” for power sailing in light air, “normal” for medium wind conditions, and “tight” for windy weather (and for situations where pinching to weather is of strategic value). In the “normal” position, the jib sheet runs up, about perpendicular to the deck. Adjustments from this point are miniscule.

In moderate conditions, the jib should be trimmed with the jib sheet at right angles to the deck.

4. As to rig tension, Harbor 20 racers have found it unnecessary to adjust the traveler off of center; and in light air there is very little backstay tension. When you find you are easing the main to keep the boat flat in puffs, it is time to start adding tension to the backstay.

5. When ducking another Harbor 20, there is a lot of boat behind the helmsman. Tom pointed out that it is important, especially when windy, to let off the main to relieve helm pressure BUT you need to be sure NOT to let out the jib. Keeping the jib in tight helps to keep the bow down, while letting the jib out would make the boat want to head into the wind – right toward the boat you are trying to duck.

Patsee’s team has the mainsheet nicely centered and the backstay just right for light air. 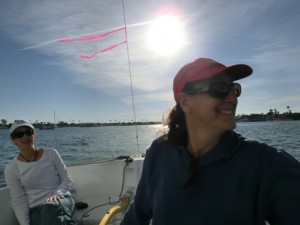 6. When rounding the weather mark, Tom recommended that we keep the jib in tight to keep the bow down, then ease the jib, ease the Cunningham, and loosen the vang. He cautioned us not to be in a hurry to wing the jib but to wait until we are sure it will fly. When the time is right to wing the jib, the crew should grab both jib sheets and throw the jib boom to weather. Once it is on its way, tighten the winger line on the console. And then tighten the jib outhaul to maximize the sail area that will be exposed to the wind.

7. The Harbor 20 weighs 1,800 pounds, so it accelerates relatively slowly and carries longer. At the start, be sure the boat is moving when the gun goes off – no luffing on the line! When going upwind in light air, keep the number of tacks to a minimum. And when preparing to dock the boat at the end of the day, be sure to leave plenty of time for the boat to coast to a stop.

At the conclusion of Tom’s dockside chat, the coaches gathered their teams, finished rigging their boats, and set sail. 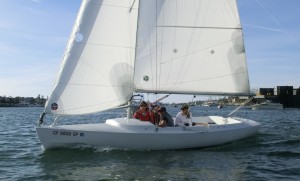 Harbor 20 racers getting ready to head for the racecourse.

The racecourse was about 20 minutes from the yacht club, so everyone had plenty of time to get adjusted to the boats and to experiment with the various crew positions.

We reached to the starting area and then practiced sailing upwind and downwind, practicing tacks, jibes, and sail trim.

As soon as all five boats were within shouting distance, the committee set the Come Within Hail flag, and the racing began.

The committee gave us two practice starts and then ran three windward / leeward races. Wind conditions were perfect, and the air temperature was 70 degrees with clear skies and excellent visibility. 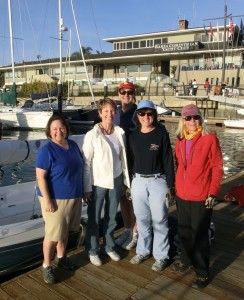 Jane Horst and her team

strategizing before the start.

My team members usually sail on much larger boats, so they were thrilled at the Harbor 20’s light helm and amazing maneuverability. Our drivers quickly learned not to push the tiller too far to leeward in a tack – pushing the tip of the tiller to the edge of the cockpit seat is plenty in most situations (anything more than a 12 1/2 degrees of rudder angle turns the rudder into a brake anyway, so avoid going there if you can).

Being accustomed to much heavier helms on the bigger boats, our team skippers found themselves grabbing the tiller and hanging on as if our lives depended on it. A little coaching turned their death grips into a much more relaxed fingertip style of tiller steering. And it instantly became obvious that, if given a chance, the Harbor 20 will respond automatically to wind shifts and increases in velocity. One of our crew said, “Wow. If you just give her a little reign, she’ll drive herself!”

Laura Acocella smiling big after a first place finish at the helm of H20 #277.

Cracking off for a perfect weather mark rounding.

Jib trim upwind was another thrill that took some time to get used to. It was really hard to remember not to let off the jib during each tack and haul it around to the other side. Aren’t self-tacking jibs amazing! And when making adjustments in jib tension, it took a few minutes to realize that “Let out the jib” meant 1/4” at most, not a foot.

Our team got excellent starts, really close to the line and moving nicely. We got two firsts and a second. (But who is counting? After all, it was just for practice.) 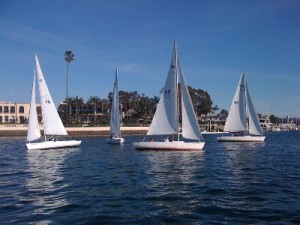 On the way back to the club, everyone marveled at how relaxed they were. They loved racing Harbor 20s. No bruises. No tension. No hassle.

“Having only raced & crewed on ‘bigger boats’ – it was amazing how fun and easy racing the Harbor 20 turned out to be! No winches, no lines running all over, just trim the sails and go for tactics and speed. What a great day on a super boat!

We will be watching the website – www.scya.org – for details regarding next year’s convention.