The three series Lorin Weiss Regatta concluded with awards at the BCYC Sunday after the races. A total of fifteen races were conducted over three days beginning in April and concluding yesterday. Approximately 27 Harbor 20s participated in the regatta. A beautiful and warm summer day provided the background for a very challenging last day of racing, as shifty and gusty winds toyed with even the most contemplated strategies.

Bill & Diane Menninger handily won in the A Fleet, and were awarded the Commodore Lorin Wiess Memorial Perpetual Trophy (most know this trophy as the bell next to the bar at the BCYC). 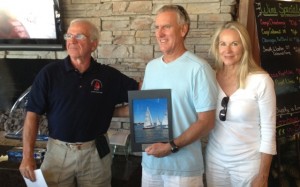 Jeff Gorden took 1st place for the B Fleet, also by a large margin, and was awarded the Jim Kerrigan Perpetual Trophy.

And a first-time award was given to the recently formed C Fleet winner, Kathryn Reed.

Official results have been posted on the race board at BCYC but not yet posted online as of this writing.