The first words that come to mind is “Dark and Stormy” and I am not talking about cocktails. Starting time was 1300 and that’s exactly when the largest squall of the day rolled through. Eleven skippers ignored the gale wind forecast and the two red flags above the harbor department and watched the squall roll in from the west. 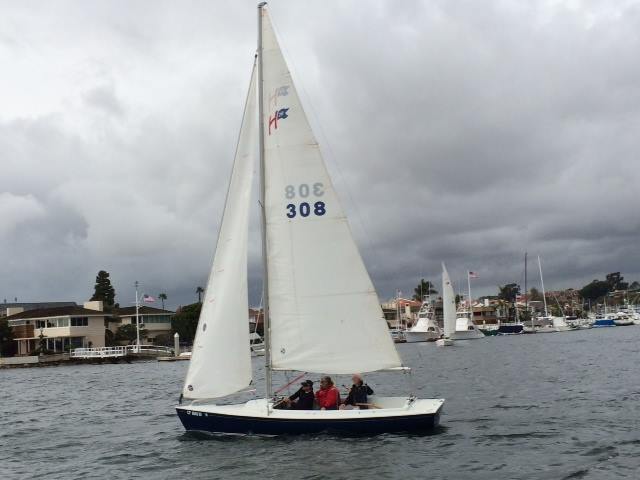 I had to work this day, at least that’s what I was telling everyone, but it was my understanding that prior to the squall arriving many skippers had thrown a reef in their mains as they watch the wind speed push into the twenties.

Chris Killian told me he had his wife Cathy and son Porter with him and was one of the skippers who placed a reef in his main before heading out onto the race course. To quote Chris “We had green water rolling over the top of the boat, I mean lots of green water,” he explained with excitement still in his voice. Fleet one races inside Newport Harbor and it does take some breeze before we get water rolling over the tops of our boats.

After the squall rolled through the wind eased some and the race committee took down the postponement. Skippers sailing with two crew members and a full main had the advantage off the wind. BYC races lean more towards random leg than windward/leewards.

Per Trebler was the only C fleeter to make it to the starting line. This allowed him to catch up in the series after missing the first day of the series. Rod Graham extended his lead in the B fleet with two firsts. In A fleet Ed Kimball and Gary Throne split the day both getting a 1 & 2. Tucker Cheadle is in a close third place in the series and has been sailing very consistently.