January 9, 2013 Peter Board Items
Enter your password to view comments.

A number of definitions have changed, including Finish, Keep Clear, Mark-Room, and Room. In Part 2, “WHEN BOATS MEET”, the following rules have changed: 14 “Avoiding Contact”,  18.2 “Giving Mark-Room”, 18.3  “Tacking in the Zone”, and 20 “Room to Tack at an Obstruction”. Rules from other parts of the RRS which have changed include 28 “Sailing the Course”, 44.1 “Taking a Penalty”, and 64 “Penalites and Exoneration”.

Rule changes which occur every four years in cadence with the Olympics provide each of us an exellent opportunity to improve our rules knowledge, whether new to the game, sailing with an outdated understanding, or expert in need of becoming current.

The next “Understanding the Racing Rules of Sailing” seminar is scheduled for Sunday, January 27, at BCYC. So, save the date, and I hope to see you there!

The 2012 Harbor 20 Awards Dinner on December 2 at Lido Isle Yacht Club is shaping up to be the best ever! We were able to book the Fabulous Nomads band for the event, and if you were at the East/West Challenge Regatta Dinner, you know just how great these guys are! In fact, we would like to rename them “The Harbor 20’s”…

Click this link for the Awards Dinner Flyer & Registration Form.

Guests welcome, but please no children.

We hope to see you there!

NHYC is eagerly anticipating the event this weekend! It looks like we should have a “Chamber of Commerce” weekend as far as weather goes. Here are a few reminders that we would like to pass along to the fleet to help things run smoothly:

All competitors are reminded they are required to dock their boat at NHYC on Saturday night. We have made arrangements to have access to the entire NHYC dock so there will be plenty of space. Boats which are normally kept on the NHYC multi-vessel docks or on docks adjacent to the club are permitted and encouraged to keep their boat there during the event.

There will be an informal, competitor led, de-brief immediately following racing on Saturday and Sunday. This will take place at the foot of the stairs to the Non-calm room (near the outside entrances to the restrooms).

As a reminder, NHYC has shower and changing facilities available for competitors to freshen up before the festivities on Saturday night. We will also make space and a rack available for anyone who wishes to leave a change of clothing during racing.

Any questions can be directed to the NHYC Race Office:

Are you up to speed on WINDWARD OFFSET and LEEWARD GATE marks?

Just like at last Sunday’s Fall Schock Regatta, a windward offset mark, and leeward gate marks will be used for the Fleet 1 Championship Regatta. If you are not familiar with these marks, come to tonight’s ASK THE JUDGES event at NHYC at 7:00. Don’t go “in the dark” to the Championship! We hope to see you there!

What’s Going On Out There?

I have heard many comments this summer about out-of-control rule-breaking, and have personally witnessed a number of such incidents. I believe there are several reasons for this unfortunate state of affairs. First, because summer evening racing  is “informal”,  as contrasted with the High Point series, there is a natural tendency to be more informal as to application of the rules. After all, everyone knows no one is going bother lodging a protest, and host yacht clubs do not wish to staff protest committees on summer evenings.

Another reason is a direct result of the success and popularity of the Harbor 20 Fleet which is growing with an influx of both inexperienced racing sailors, and very experienced sailors transitioning from other fleets. Those new to the game have had limited time to learn these complex rules and many of the experienced sailors have demonstrated an outdated knowledge of the rules. While similar to the rules one may have learned 10 or 20 years ago, the current rules are NOT THE SAME. The Racing Rules of Sailing are updated every four years in conjunction with the Olympics.

In 2008, an increasing emphasis on safety resulted in a complete re-write of Section C “At Marks and Obstructions”.  And, that is exactly where the majority of our problems are occurring, which are caused by boats approaching the windward mark on port tack which is strongly discouraged under the current rules, and boats not giving adequate mark-room at the leeward mark. If you have not studied Rule 18 in the 2008-2012 Racing Rules of Sailing, you are likely part of the problem.

When you sign the entry form for a race, you are required to agree that you will abide by the Racing Rules of Sailing. Rule #3 “ACCEPTANCE OF THE RULES” states that “By participating in a race conducted under these racing rules, each competitor and boat owner agrees to be governed by the rules”. So, if you do not know the rules, you are actually already breaking them by entering and participating in a race.

The reality is that if one has not studied the rules, one cannot actually know the rules. The collective rules “knowledge” at most yacht clubs could be described as “tribal”, which is incomplete at best, and incorrect at worst. But, Harbor 20 Fleet 1 aspires to a higher standard, as evidenced by the fact that a majority of our participants have already attended the comprehensive “Understanding the Racing Rules of Sailing” one-day seminar at least once. And the timing is right, because the second presentation of this seminar in 2012 is coming up on September 9. If you are not well versed in the rules, or you know someone who could benefit by attending, please come join us, or urge others to attend.

If you are thinking “I’ll just wait until next year because the rules will change again”, Dave Perry has informed me that the changes to the rules in Part 2 are not substantive.  And, if you think you really do know the rules, you can test your knowledge by taking Dave Dellenbaugh’s “Rules Quiz”.  Experience has shown that there is a direct correlation between the quality of competition in Harbor 20 Fleet 1 and the number of our sailors who have attended this comprehensive seminar. So please, either attend yourself, or urge someone else who could benefit by the experience. You’ll be glad you did!

Don’t miss this Premier Social Event of the Year! 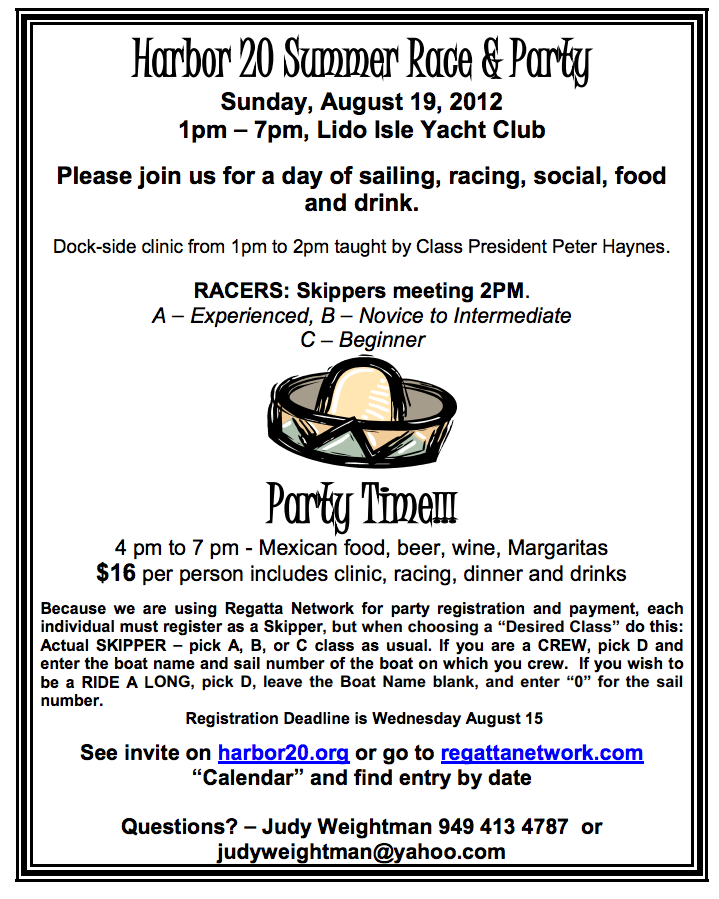 This July 30 marks 60 days before the Class and Fleet 1 Championship Regatta.  Boats that are racing in this regatta must have been kept in the water continuously for 60 days prior to Class Championships and Fleet Championships, per our Class rules. If you are planning to haul your Harbor 20 for maintenance before the Champs you must do it before July 30.

Also, now is the time to make sure you are familiar with the Class and Fleet 1 rules regarding eligibility of both skipper and crew, equipment required and permitted to be on board, and other rules pertaining to the Championship Regatta. The Class and Fleet 1 Bylaws can be found on-line at www.Harbor20.org. Don’t put yourself in the position of being disqualified because of rule violations.

If you have any questions, you can contact Class Measurer Warren Duncan, Fleet 1 Measurer Lee Sutherland, Class President Peter Haynes, or me, Fleet 1 Captain John Whitney.

July 9, 2012 Peter Fleet 1
This October 4-6, H20 Fleet 1 will be hosting an exciting event – the 2012 East/West Challenge! The event builds on one which has been hosted on alternate coasts for many years which involved Fleet 1 in Newport Beach and Fleet 3 in Hilton Head, SC. With the growth of the H20 class, this year we will be including Fleet 4 from Santa Barbara, and Fleet 5 from Annapolis, Md. Four boats from each fleet will participate in a fleet race event, with trophies awarded for first, second and third places. The East/West Challenge perpetual trophy will be awarded to the “coast” with the better aggregate score. The East/West Challenge is not just a sailing event, but is also a premier social event, being a perfect opportunity to interact with sailors from other fleets and from around the country.
A great way to be involved in this event is to help provide housing for our guests. I had the opportunity to participate in last year’s event at Hilton Head, and must say that the hospitality was incredible! And I am sure that Fleet 1 will be able to reciprocate.
So, what’s in it for our housing volunteers? A great opportunity to make new friends. And front row seating to watch the regatta will be provided! We plan on having floating docks anchored in the vicinity of the racing venue, with seats, coolers, etc. Our housing hosts are also invited to the social events, including a reception Friday night at NHYC, and a banqet with live music by the Nomads on Saturday night.
If you would be interested in participating in this exciting event by helping to provide housing and hospitality, please contact:
Debra Haynes      949-650-7659     katface@pacbell.net

You’ll be glad you did!

If you are already planning on hosting some guests for this event, but have not responded, please do.