Race education for the 2012 season started off with a bang with the “Understanding the Racing Rules of Sailing” seminar on Sunday, January 29, at the Bahia Corinthian Yacht Club. Thirty five people attended, from as far away as Los Angeles, Redlands, and Santa Barbara. A number of C-Fleet folks were in attendance as well as several new Harbor 20 owners. And, about a third of the attendees were from other fleets, primarily PHRF, now that folks are starting to look to the Harbor 20 Fleet as the place to learn about sailboat racing. As this experience can be a bit like “drinking from a fire hose”, there were also many repeat attendees, some who have been up to six times. 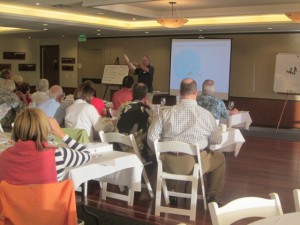 “As a B sailor rules have always been hard for me. The visual approach really helped” -Kathy Sangster

“The best rules seminar I have ever been involved with”. -Sandy Mills

“A must for anyone racing sailboats. Peter makes a complex and arcane set of codified rules understandable and interesting. This fast paced one-day class is supported with excellent reference materials”. -Bob King

“The animations bring the rules to life. This course provides a chance to experience the rules with examples that allow the student to connect the actual rules to the practical application of getting through the race. Should be required course work for all participating in large fleet racing”. – Mike Psomas

“Having never had andy formal sailing training, I am very happy to have attended this seminar which helped me begin to understand how important the rules are to making the race fun, safe, and fair”. -Donna Vordale

“I can clearly see why the crew needs to come too”. -Ted Reed

If you missed this event, the Rules seminar will be repeated on September 9, three weeks before the Championship.

The next seminar will be “Boat Handling & Sail Trim” on March 11. We hope to see you there!

The deadline to postmark registrations for the “Understanding the Racing Rules of Sailing” seminar at BCYC on January 29 at the lower price of $75.00  is Saturday, January 21. Thereafter the cost is $85.00. The reason for a deadline is to encourage folks to help us with logistics, because the club requires a head-count ahead of time for purposes of facility planning and food/beverage preparation.

START THE NEW YEAR OUT RIGHT!

LEARN OR RE-LEARN THE RACING RULES!

A unique teaching method makes this seminar a learning experience, as differentiated from “question and answer” rules clinics, which are generally unstructured, and pre-suppose some rules knowledge. This seminar is structured in such a way that each concept leads to the next making comprehension easy and natural. Animated PowerPoint makes the rules come to life. Here are some comments from folks who have already attended:

“I’ve been attending rules seminars all my life – I’ve seen them all – and this is the best I’ve ever seen!” –Tom Schock

“I was impressed with how you presented the sailing rules in an interesting and entertaining way. The class drew all levels of sailors from beginning sailors like myself to sailors have been racing competitively for 50 years and more. The visual teaching coupled with your workbook were a great way to learn. I was surprised with how quickly the day slipped by and how much we covered.” –Trish Ramser

“At $75 this seminar is a real bargain and offers much more than seminars at double this price, the 120 plus page handout is easily worth the seminar price itself. Along with boat handling and racing strategies and tactics, the rules of racing are critical knowledge for the casual and experienced sailor.” -Tom Madden

“I learned in one day what would ordinarily take 10 racing seasons to learn. Invaluable!” –Guy Doran

“Comprehensive, informative and well presented. I’ll be back because repetition is essential.” –Mary Bacon

“An absolute winner! From novice to knowledgeable in one day.” –Nina Manning

“I could attend this course over and over and would learn something new every time.” –Neal Crowley

While this seminar was originally prepared to the Harbor 20 Fleet, there is nothing H20 specific in the materials.

We hope to see you there!

With the continuing growth of the Harbor 20 A and B Fleets in Newport Harbor, the time has come to introduce a C Fleet.

I am very happy to announce that Fleet 1 now has a C Fleet! Tom Schock tells me this may very well be the first time a one-design keelboat fleet has had the depth and diversity to divide into three fleets.

Another achievement for the Harbor 20 Class!

The Bahia Corinthian Yacht Club is the first yacht club to agree to offer C Fleet starts for their races. The C sailors will be invited to the Midwinter Regatta in February, the multi-month Lorin Weiss Memorial Series this winter, and the summertime Taco Tuesday Twilight Series. Many thanks to Sailing Director Paul DeCapua, and everyone at BCYC, for stepping up to the plate and being the first to support us in this new, and exciting endeavor!

We have over 100 members in Newport Harbor’s Fleet 1. 30 to 40 of these members race their boats on a regular basis.

It is obvious there are a lot of Harbor 20 sailors in our harbor who don’t use their boats for racing. This is perfectly okay, of course – there is nothing better than kicking back and daysailing a Harbor 20 – but I bet there are lots of people who are itching to race. I have even had calls from folks who indicated that they had been “shadowing” our evening fun races, but didn’t know how to get involved. And even if they did, the B Fleet has grown to a size where starts can be pretty intimidating.

What was needed was a way for folks to be able to try their hand at racing their Harbor 20s in a more relaxed, less overwhelming fashion. So, a “trial balloon” was floated at this year’s Summer Party at Lido Isle Yacht Club. We added C Fleet racing and a basic racing clinic to the agenda, and anyone interested in the “Harbor 20 Scene” was invited to participate.

To our delight, twelve new boats showed up for the C Fleet race!

After an introductory chalk-talk, experienced sailors were paired up to sail with the new folks; and the twelve new boats were divided into C1s and C2s, with six boats each. After watching from the safety and comfort of the dock as the A and B Fleets started their first race, the new C sailors, with designated “mentors” onboard, headed out for their start. With the more experienced A and B sailors out of the area, our new C sailors enjoyed two races; and a fun, and safe time was had by all! For more photos of this terrific event click Harbor 20 Class Summer Party

Ever since this exciting Summer Party, people keep asking, “So, what’s going on with the C Fleet?”

Given the success of the event, the next step was to approach the yacht clubs to see if there would be interest in starting a C Fleet following the starts of the As and Bs, at their events. The logistical challenges are obvious, as race committees typically finish all of the fleets before starting the next round of races.

Adding a third fleet would burn up additional time and might reduce the number of races the committee could run for the A and B sailors.

To make the racing perfect for everyone, the idea was proposed that during the time the A and B fleets run multiple races, the C Fleet would be sent on one longer course. This would allow the beginning racers to experience a start, and get accustomed to handling their boats in the company of others but away from the maddening crowd. Meanwhile, the A and B sailors could have as many starts and finishes as time and conditions would allow. The C Fleet races would be open to all Harbor 20 sailors, whether they are new to racing altogether, or perhaps have been struggling in the B Fleet.

The formation of this brand new C Fleet offers Harbor 20 owners the perfect opportunity to ease into racing. I will be really excited to see them on the racecourse!

The C Fleet will now be a venue for those Harbor 20 owners who always wanted to race but were uncomfortable being thrown into the fiercely competitive A and B Fleets. The C sailors will have plenty of opportunity to compete at the various races held by the BCYC. Be sure to check out the C Fleet sailors race at the Midwinter Regatta, the Lorin Weiss Memorial Series, and at the Taco Tuesday Twilight Series.

The culmination of the High Point Series is coming up soon, with the Fall Schock Regatta, the Championship Tune-up and the Championship Regatta, followed by the beginning of the 2011-2012 racing season. Join us for this seminar, new for 2011, and get a better understanding about what is happening on the race course! 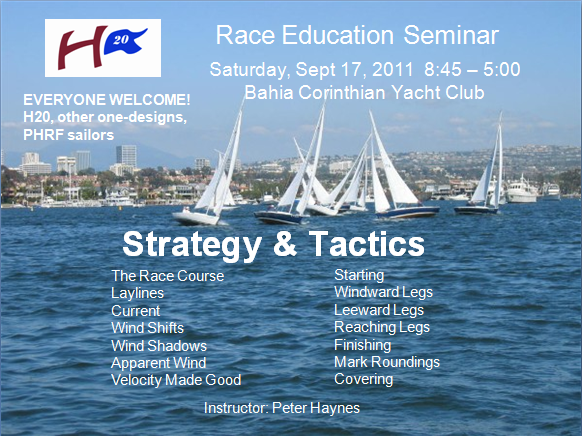 You’ve seen them out there, all those Harbor 20’s racing about Newport Harbor. Have you ever contemplated competing in your Harbor 20, but just don’t know how to get started? Jumping in to the existing B-Fleet can be intimidating because the fleet is pretty big. So, this year at our Summer Party there will be a great opportunity to get started. We will be offering an introductory clinic and a C-Fleet start in addition to the A and B Fleets. If you are totally new to racing, rusty after years of having not competed, struggling in the B-Fleet, or confused as to the rules, I would like invite you to join us on the docks at 1:00, when I will provide an overview of the basics of starting, sailing the course, rounding the marks, and the fundamental rules.  The starting line is close to the docks, so at 2:00 we will watch the A and B Fleet starts before heading out for a C-Fleet start, avoiding the congestion and learning from the actions of the other fleets. This will be very informal and low key, so come on! Come give it a try. Imagine yourself enjoying your Harbor 20 like these Harbor 20 sailors!

Come and join us. Click here to register. You’ll be glad you did!

If you have questions or comments, please feel free to contact me. 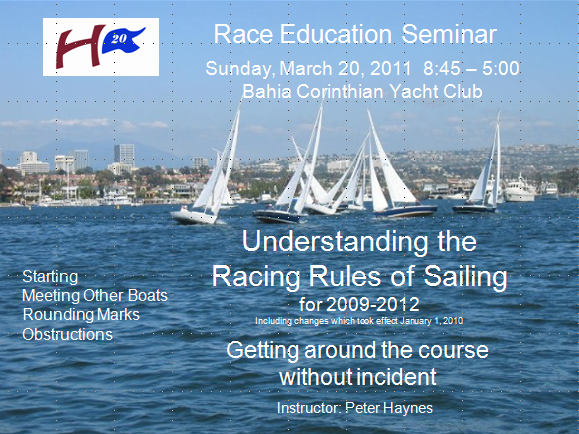 “Peter is doing his rules seminar on March 20 at BCYC. I think every racing member of Fleet 1 should be there. I plan on going – this will be my third time – I look at it as a refresher course. How can you play the game if you don’t know the rules?” 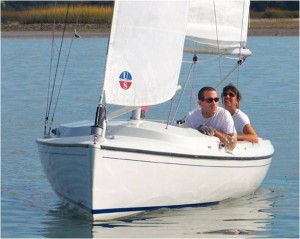